Whenever I tell someone I had Vegan Mac & ‘Cheese’ they invariably turn their nose up and dismiss the idea, but bear with me! What this version lacks in terms of the stringiness of real cheese, it makes up for in guilt-free comfort and taste. Regular Mac & Cheese is always full of butter, flour, milk, white pasta and, as the name suggests, lots and lots of cheese. While delicious, it’s pretty obviously terrible for your arteries! This recipe for Vegan Mac & ‘Cheese’ uses healthier whole wheat pasta, and a delicious and healthy cheese substitute sauce made primarily from cashew nuts, butternut squash and nutritional yeast. 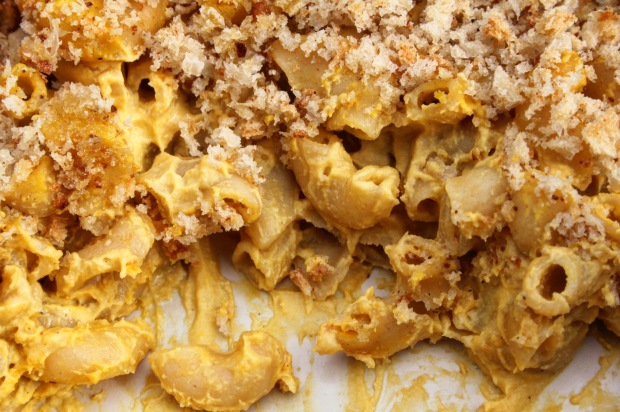 If you’ve never heard of nutritional yeast, it consists of highly nutritious savoury flavoured flakes. You can buy it quite cheaply (€3-5) in most health food stores. The first time I tried it I found the flavour a bit weird, but by the third tasting I was addicted! It has an unusual umami and cheesy flavour to it, and will give the vegan sauce its cheesy flavour in this recipe.

If you want to make this recipe in batch and enjoy it throughout the week, I would advise keeping the vegan ‘cheese’ mixture separate from the pasta until just before you eat it, as the pasta tends to soak up all of the moisture and the texture becomes very heavy and stodgy. 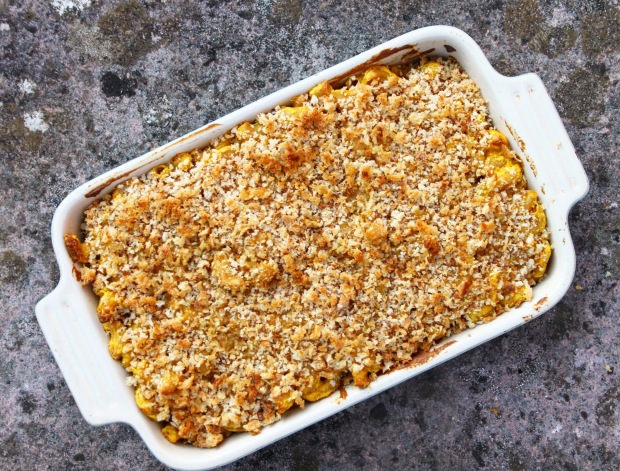 Soak the cashew nuts in boiling water for.

Clean the seeds out of the butternut squash, and roast it in the oven until soft (30-40 min), along with the whole garlic cloves.

Cook the pasta in salted water, and drain.

Scoop the butternut squash into a blender, along with the roasted garlic, cashew nuts, nutritional yeast, turmeric and water. Blend until smooth. Add some more water if the mixture still feels a little sticky.

Season the mixture well with salt and pepper, with tasting to ensure it’s balanced.

Add the cooked pasta to the mixture, then spoon into an oven dish. Top with breadcrumbs and a drizzle of olive oil.

Bake for ~15 min, or until the breadcrumbs are toasted.

Tag @thecorkfork to show me your Vegan Mac & Cheese creations!